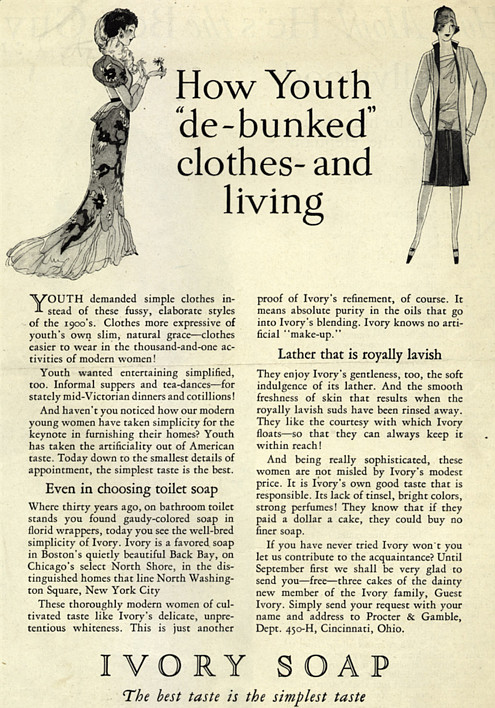 Who Was the New Woman?

An excellent viewpoint article from the e-books regarding "The New Woman" and her place in American culture.

“Every man becomes civilized between the ages of 18 and 23. If he does not go through a civilizing experience at that time of his life, he will not become a civilized man. The men who went to war at 18 missed the civilizing…All you young people who served in the war are a lost generation. You have no respect for anything. You drink yourselves to death.” --Gertrude Stein on the American expatriate writers living in Parisafter World War I

Images and Resources of the 1920's
Unfortunately there is not one central location on the web for credible, scholarly articles pertaining to 1920's culture. This search will require digging around in a number of different sites. There is a lot of information that seems to be directed to younger grade levels and just a passing overview of the decade (usually written by amateur fans of the decade rather than by historians and scholars). In your searches be sure to vary your search terms and use keywords/phrases that are more specific than simply "1920's culture" etc. Some examples: Consumer culture of the 1920's, The Lost Generation, prohibition era, specific personalities (Gertrude Stein, Louise Brooks, Hemingway, Fitzgerald,