Please check this page to find updates about new books and ebooks available in the Lower School Library!

Quintessence is an extraordinary story from Jess Redman about friendship, self-discovery, interconnectedness, and the inexplicable elements that make you you.
Find the Elements. Grow the Light. Save the Starling.
Three months ago, twelve-year-old Alma moved to the town of Four Points. Her panic attacks started a week later, and they haven’t stopped―even though she’s told her parents that they have. She’s homesick and friendless and every day she feels less and less like herself.
But one day she finds a telescope in the town’s junk shop, and through its lens, she watches a star―a star that looks like a child―fall from the sky and into her backyard. Alma knows what it’s like to be lost and afraid, to long for home, and she knows that it’s up to her to save the star. And so, with the help of some unlikely new friends from Astronomy Club, she sets out on a quest that will take a little bit of science, a little bit of magic, and her whole self. 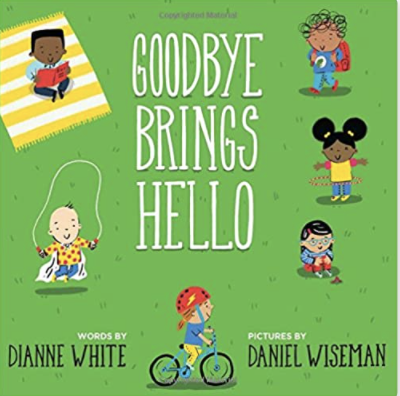 There are many ways of letting go.
With each goodbye, a new hello.
From being pushed on a swing to learning how to pump your legs yourself, from riding a beloved trike to mastering your first bike ride, from leaving the comforts of home behind to venturing forth on that first day of school, milestones are exciting but hard. They mean having to say goodbye to one moment in order to welcome the next.
Honest and uplifting, this cheerfully illustrated ode to change gently empowers readers to brave life's milestones, both large and small. 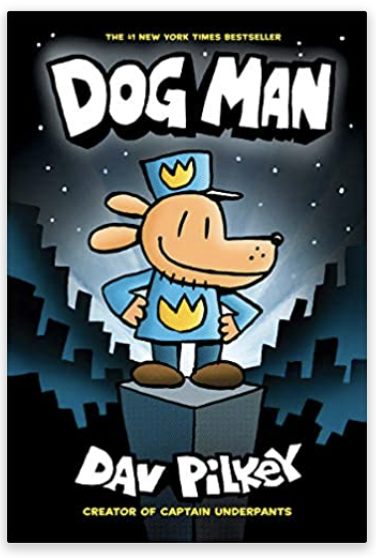 George and Harold have created a new breed of justice. With the head of a dog and the body of a human, this heroic hound digs into deception, claws after crooks, rolls over robbers, and scampers after squirrels. Will he be able to resist the call of the wild to answer the call of duty?Dav Pilkey's wildly popular Dog Man series appeals to readers of all ages and explores universally positive themes, including empathy, kindness, persistence, and the importance of being true to one's self.

Wallow the Bear lives a comfortable life deep in the woods. But when it rains, Wallow gets sad. He becomes gloomy and doesn't know what to do. When it starts drizzling, he hunkers down in his cave. One rainy day, he hears splashes and giggling coming from outside. What can that be? He takes a peek out the window and sees owl emptying water with a bucket. More of a reason to stay inside! And then he hears more splashing and giggling. Will Wallow have the courage to come out of his cave?

For one young girl, summer is the season of no school, of days spent at the pool, and of picking golden limes off the trees. But summer doesn’t start until her lola—her grandmother from the Philippines—comes for her annual visit.

Summer is special. For her lola fills the house with the aroma of mango jam, funny stories of baking mishaps, and her quiet sweet singing in Tagalog. And in turn, her granddaughter brings Lola to the beach, to view fireworks at the park, and to catch fish at their lake.

When Lola visits, the whole family gathers to cook and eat and share in their happiness of another season spent together. Yet as summer transitions to fall, her lola must return home—but not without a surprise for her granddaughter to preserve their special summer a bit longer.

Thesaurus Has A Secret 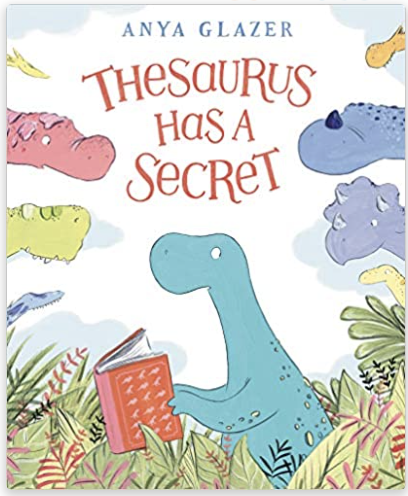 Thesaurus is an ordinary dinosaur. A very ordinary dinosaur . . . who just happens to love words. And the other dinos know that’s just who he is. But behind his verbose and fancy language, Thesaurus has also been keeping something absolutely, very, extremely top secret.

But as his lies begin to stack up, someone begins to notice. And if the other dinos discover what Thesaurus is hiding, they won’t think he’s such a normal dinosaur after all. 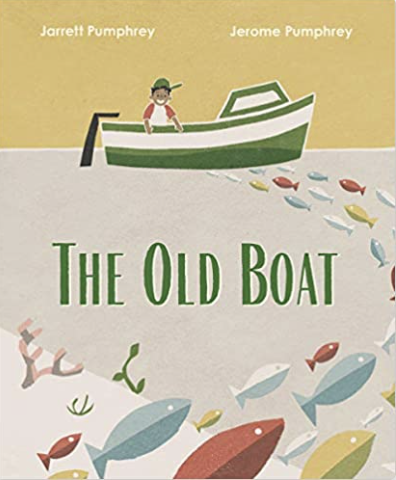 Off a small island,

and a young boy

Together, boy and boat ride the shifting tides, catching wants and wishes until fate calls for a sea change. Brothers and collaborators Jarrett and Jerome Pumphrey’s newest picture book is a masterfully crafted celebration of the natural world and tribute to the families we make and the homes that we nurture. 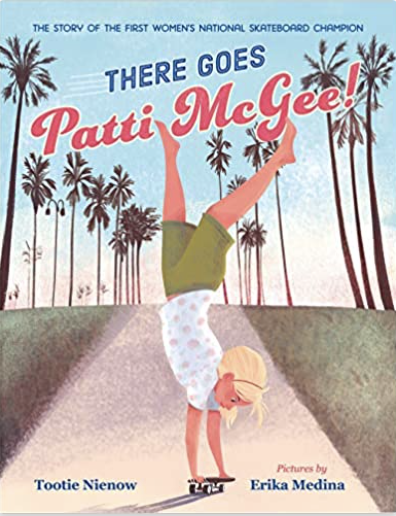 Brought to life by Erika Medina's dynamic and joyful illustrations, There Goes Patti McGee! walks us through Patti first place win in the women’s division of the 1964 National Skateboard Championship. She wowed the judges with with what would become her signature move―the rolling handstand. Inspiring and unapologetic, Patti McGee proves that anyone can skate.

Freda is devastated when she can’t eat all the delicious blueberries she’s picked. She has to wait a whole year before they’re back, and she doesn’t want to lose them! Then Gran reminds her that they can save blueberries in a jar, as jam. So Freda begins to save all her favorite things. But it turns out that saving everything also means she can’t enjoy anything, and Freda realizes that some things are best saved as memories.

After Kiyoshi watches his grandfather, Eto, compose his delicate haiku, he wonders out loud: "Where do poems come from?" His grandfather answers by taking him on a walk through their city, where they see a cat perched on a hill of oranges; hear the fluttering of wings; imagine what's behind a tall wall; and discuss their walk, with each incident inspiring a wonderful new haiku from Eto. As Kiyoshi discovers that poems come from the way the world outside of us meets the world within each of us, he also finds the courage to write a haiku of his own.

This lovely book will speak to any reader who treasures poetry, city life, grandparents, or the beauty of the everyday. 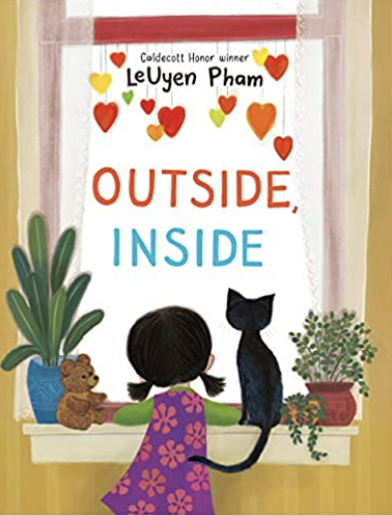 Something strange happened on an unremarkable day just before the season changed.
Everybody who was outside . . .
. . . went inside.
Outside, it was quieter, wilder, and different. Inside, we laughed, we cried, and we grew.
We remembered to protect the ones we love and love the ones who protect us.
While the world changed outside, we became stronger on the inside and believed that someday soon spring would come again. 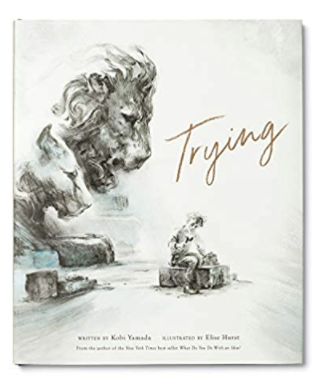 How will you know what's possible if you don't try?

This is a story for anyone who has ever felt like a beginner, or had doubts, or worried they weren't good enough. It's a story for those who have experienced the pain of trying something new and not having it turn out as they had hoped.

Written by New York Times best-selling author Kobi Yamada, this captivating book celebrates the way failure is the just the beginning of the journey. With alluring black-and-white illustrations and a powerful message, this beautiful tale is about how failure has so much to offer--lessons that help us learn, grow, and discover all the amazing things we can do.

Return to the world of the best-selling Greenglass House, where smugglers, magic, and pyrotechnics mix, in a new adventure from a New York Times best-selling, National Book Award–nominated, and Edgar Award–winning author.
Lucy Bluecrowne is beginning a new life ashore with her stepmother and half brother, though she’s certain the only place she’ll ever belong is with her father on a ship of war as part of the crew. She doesn’t care that living in a house is safer and the proper place for a twelve-year-old girl; it’s boring. But then two nefarious strangers identify her little brother as the pyrotechnical prodigy they need to enact an evil plan, and it will take all Lucy’s fighting instincts to keep her family together.
Set in the magical Greenglass House world, this action-packed tale of the house’s first inhabitants reveals the origins of some of its many secrets.

On his birthday, Billy Miller wishes for something exciting to happen. But he immediately regrets his wish when an ambulance rushes to his neighbor’s house. Is Billy responsible? Award-winning author Kevin Henkes delivers a short, funny, and emotionally complex novel complete with misplaced love letters, surprising critters, art projects, misguided tattoos—and another surprise for Billy and his family, maybe the best one yet!

Illustrated throughout with black-and-white art by the author, this is a perfect novel for the early elementary grades and an essential choice for summer reading. A stand-alone companion to The Year of Billy Miller, a Newbery Honor Book.